In its September 2022 briefing LonRes could report that Prime London prices rose 4.2% since September 2021, with transactions above the pre-pandemic average. There were notes of caution, with 33% more Prime London deals falling through in August compared to 2021, while new instructions were rather patchy, with the £5m+ segment of the market seeing 30% more instructions over 12 months than the 2018 average, while the £2-5m range saw only a 5% on the same basis.

Savills reported that the performance of prime residential in the first nine months of 2022 has been ‘remarkable’, despite rising cost of living and interest rates. Even so, it reported that 29% of domestic buyers had reduced their budgets, with less commitment to move. This in turn means sellers are now hoping to price keenly and sit back might face more risk.

With further upward pressure on interest rates looking inevitable, and with 10-year gilts yields briefly matching the MCSI All-Property yield, Knight Frank forecasts a 6% fall in UK house prices in 2023 and 4% in 2024. Prime Central London is expected to fall 3% in 2023 before recovering in 2025 (See Table). Knight Frank notes that earlier in the year it had identified the economic sweet spot the market was in, during Q2, and that such things never last for ever. Savills is more measured but notes that even in a market like Prime London, driven more by global flows rather than local debt costs, sustained prices rises have not taken hold.

Savills reported that, while in the summer the market for properties above £1million was ‘surprisingly buoyant’, with 81% more sales than pre-pandemic, they also noted an increased sense of caution as autumn arrived. While “best in class have continued to attract competitive bidding…levels of buyer registrations and viewing numbers have become somewhat less frenetic.” 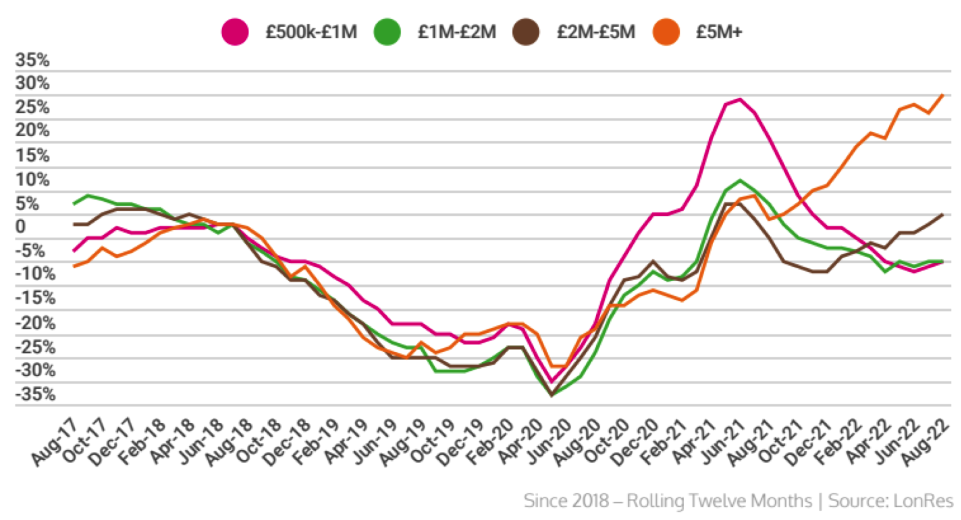