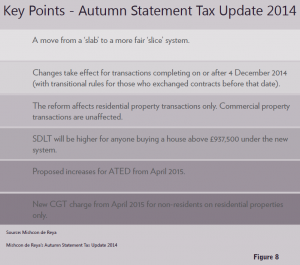 The 2014 Autumn Statement has clearly targeted the non-doms and the top-end house buyers, which was expected given the imminent election in May 2015 (see figure 8). What was least expected were the changes in the Stamp Duty Land Tax (SDLT) rates. The Chancellor’s Autumn Statement announced a major reform of SDLT for residential property transactions. With effect from 4 December 2014, the structure, rates, and thresholds are being changed. The new rates, which apply were purchases are completed on or after 4 December, are set out below (see figure 9). Transitional rules apply to those who have exchanged contracts before that date. 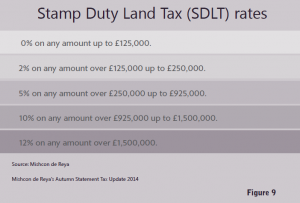 The old ‘slab’ system for SDLT has long been criticised for its unfairness and distortion of the market. For example, a person paying £250,000 for a home paid 1% SDLT on the entire purchase price (£2,500), whereas a person paying £251,000 paid 3% SDLT (£7,530). Hence the new system is considered a more progressive system, as rather than paying a single rate of SDLT on the full purchase price of the property, a buyer now pays different rates within different bands. The changes will eliminate the ‘cliff edge’ increases in SDLT liability, which occurred under the old rules, and so will reduce pricing distortions that occurred around the previous thresholds. The Government has highlighted the fact that 98% of homeowners will pay less SDLT as a result of these changes. The ‘break-even’ price is £937,000 – so at prices below this, buyers will pay less SDLT under the new rules, but at prices above they will pay more, and at the top-end considerably more.

It is important to highlight from 20 March 2014, SDLT has been charged at 15% on interests in residential dwellings costing more than £500,000 purchased by certain non-natural persons (mainly companies and partnerships), where they are not property rental businesses, developers, or traders. So effectively, if a company is buying a property to be occupied as a home by the shareholder, or someone connected with the shareholder, then the 15% rate remains. This percentage applies on the entire price of the property. If the company is buying the property as a genuine landlord or developer, then relief from the 15% should be available. This means the new rates / method of calculating SDLT on residential property would apply. HMRC has a new calculator for the SDLT which can be found at www.hmrc.gov.uk/tools/sdlt/land-and-property.htm. 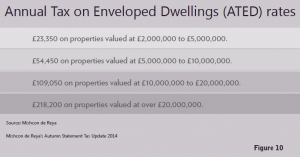 It is the responsibility of the owner to file for ATED and the value can be either self-assessed or assessed by a professional valuer – which is more advisable. The valuation will be reported on the ATED return and must be on an open-market willing buyer, willing seller basis. This will not change for five years, even though the property may increase in value, when a revaluation must be done. So effectively, the property will remain in the same band for five years although the rate of tax in each band is likely to increase in that period. For properties held on April 2013, the ATED band is determined by a valuation of the property as at April 2012, while for properties acquired after April 2012, the ATED band is decided by the price paid.

The Government’s long-awaited final proposals introducing Capital Gains Tax (CGT) for non-UK residents disposing of UK residential property have now been published. The charge (20% for companies, 18% or 28% for individuals, and 28% for trusts) will apply to sales and gifts of UK residential property, although it will only apply to gains arising from 6 April 2015 onwards. To calculate the post-April 2015 gain, either the property can be revalued at that date, or the entire gain from acquisition to disposal can be time-apportioned. Significantly, the Government has stated it “…does not intend to broaden the scope of the charge and apply CGT to disposals of interests in non-residential property”. There will be an exemption for residential properties held by institutions and widely held companies and funds to encourage institutional investment. The CGT main residence exemption is also being restricted: broadly, a non-resident must spend at least 90 midnights in their UK home per tax year for it to be treated as their main residence in that year.

Confusingly, the 28% ATED-related CGT charge, which currently applies to certain companies owning residential property, where the property is not used for genuine business purposes, and which dispose of properties after April 2013 (the tax is only charged at the gain arising post-April 2013), will remain and will take priority where both charges apply. The Government has decided against a withholding tax system and is effectively relying on self-assessment. It is unfortunate the ATED-related CGT charge remains, as this will introduce a degree of complexity in the operation of the new charge. For example, whilst ATED-related CGT takes priority over the new CGT charge, it is possible some properties may fall within the two regimes at different times, requiring apportionments to be made. Without a withholding tax, questions remain about how the tax will be enforced where a non-resident sells their only UK property and receives the sale proceeds outside the UK. It has been suggested CGT will also apply to gains from disposals of off-plan residential properties, although obvious difficulties apply to its enforcement.

Finally, there were a couple of overt digs at the Labour leadership, as well as a clear attack on Labour’s proposed ‘Mansion Tax’, especially with the surprise changes to the SDLT.